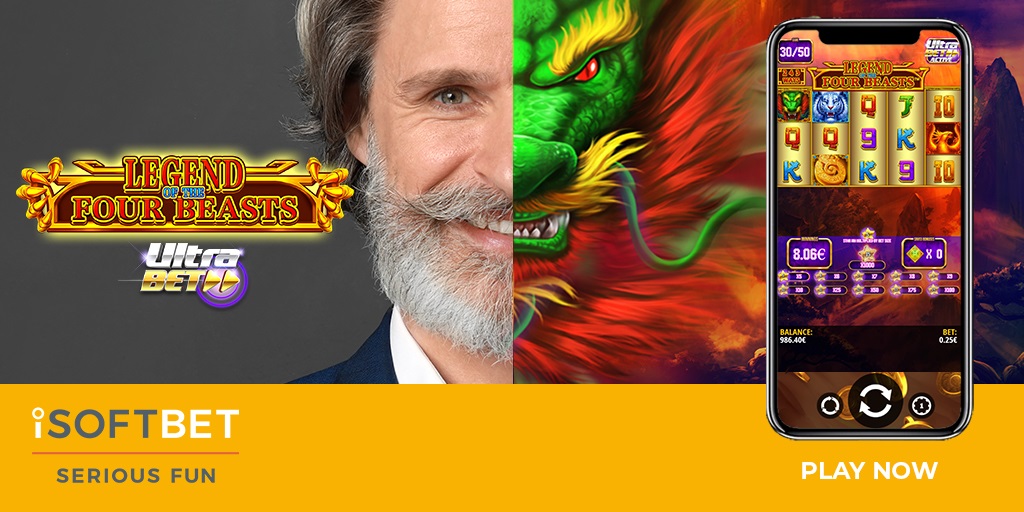 ISOFTBET has embarked on another mythological adventure in latest hit Legend of the Four Beasts.

The five-reel, 243 ways to win hit sees fearsome dragons, phoenixes, tigers and more upon the reels, while also featuring multiple types of Wilds along with Jade and Gold Scatter symbols.

Blue Wilds will only be found on reels 3, 4 and 5, expanding both vertically and horizontally, forming multiple wilds and giving any spin the potential to lead to huge wins.

If three or more of the Scatter symbols land, then players are awarded at least 10 free spins, where Golden Wilds will expand both ways while also increasing a multiplier by 1x, with an unlimited max potential. Free Spins can also be retriggered.

In certain jurisdictions, players can also enjoy the Ultra Bet feature, where they can buy 50 rapid spins, before a cumulative prize is awarded for any wins of that spin, while stars can also be collected to award a bonus cash prize. Legend of the Four Beasts is the latest iSoftBet game to utilise this mechanic, following recent release Pyramid Pays.

“Legend of the Four Beasts sees us venture into mythology again in search of huge wins, this time facing off against fearsome creatures of Chinese legend,” said iSoftBet head of games Mark Claxton. “With two types of expanding Wilds, increasing multipliers and the Ultra Bet mechanic, we’re giving players a huge array of tools so that any spin can lead to plentiful riches.”